Finding Hope in the Opioid Crisis: An Interview with Pennsylvania Secretary of Drug and Alcohol Programs Jen Smith 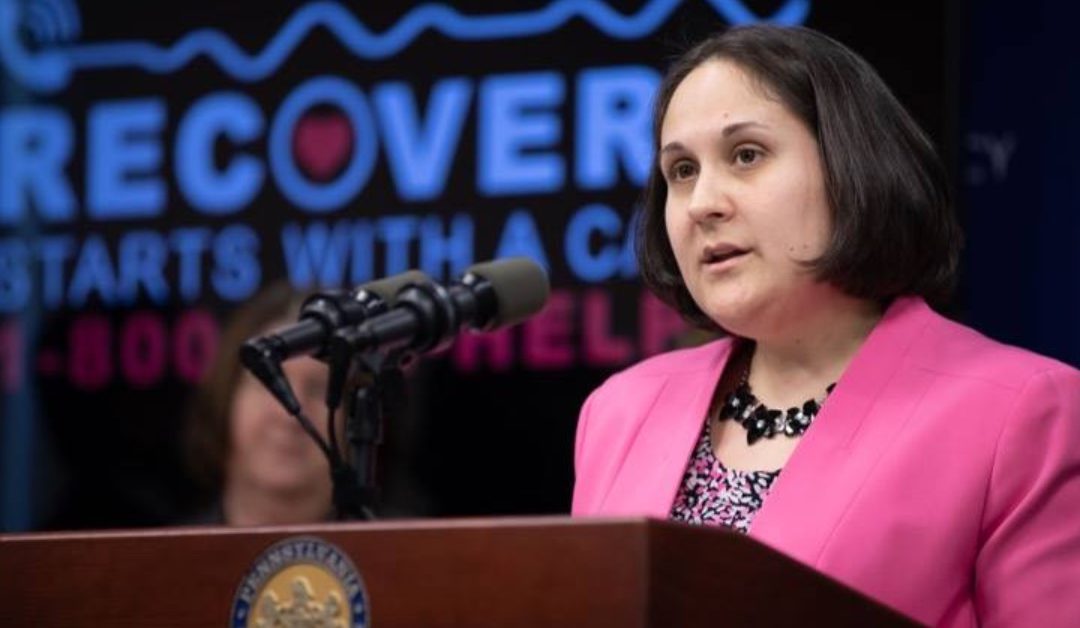 In today’s highly polarized political climate, it might seem as though there are no subjects upon which lawmakers from the Left and Right can agree. Even here in Pennsylvania, legislators clash over taxes, health care, spending, and more.

Believe it or not, though, there is at least one critically important issue upon which Pennsylvania Republicans and Democrats are largely united: stemming the tide of drug and alcohol abuse in the Commonwealth.

A Nonpartisan Issue with Bipartisan Support

For Jen Smith, Secretary of Pennsylvania’s Department of Drug and Alcohol Programs, the broad consensus around finding solutions and finding funding to implement those solutions has been a welcome change. Appointed by Gov. Tom Wolf to head the Department in 2018, Smith had previously served in the department since 2016, when she was a deputy secretary. She’s seen the General Assembly’s approach to the issue change dramatically during her four years in the Department.

“I am one of the very, very fortunate cabinet secretaries in that this issue and really everything my department does is pretty bipartisan,” Smith said during a recent interview with The GateHouse. “I don’t really get a lot of resistance from one side or the other. I think everyone believes in saving lives and keeping people healthy, which is our mission, so I’m very lucky.”

That doesn’t mean, however, that things have been easy—especially during an opioid epidemic that has transformed and evolved over the years, ultimately culminating in Gov. Wolf’s decision to declare the crisis a “disaster” in January 2018.

“It wasn’t until late 2016 early 2017 that we really started to escalate the discussion,” Smith said. “We recognized that it wasn’t just more people becoming addicted; people were really dying in just exponential numbers. That’s when it started to become known as an epidemic or a crisis. By 2018, we had picked up so much momentum. There was much more discussion about opioids specifically and addiction and overdoses in general.”

The Impact of the Disaster Declaration

The disaster declaration escalated the urgency of the crisis and allowed for specific action to be taken, starting with the creation of an Opioid Command Center that has since brought nearly every department in state government together on a weekly basis to assess and respond to the crisis. The declaration also changed how elected officials view the problem.

Last week, for example, Smith said she met with State Senators to review the Commonwealth’s budget, and the change in tone from her first year with the Department was remarkable, she said.

“It was just so drastically different from the very first budget hearing I participated in in 2016,” Smith said. “Back then, the questions were, ‘Well, how much does it cost to treat somebody?’ ‘How much money do you need to fix this problem?’ and ‘When are you going to have it fixed?’ The tone of the questions during this year’s hearings was much more thoughtful. Lawmakers were asking, ‘How can we be more helpful?’ ‘What’s the most effective kind of medication?’ ‘How do we get this medication into the hands of providers?’ ‘How do we ensure we have adequate capacity to treat people?’”

Smith said Legislators are much more educated about the problem now than they were in the past.

“They don’t just see it as a problem that simply needs to be fixed,” she said. “They now see it as a very complicated and complex issue. They also recognize that they are not experts on this, but they still want to be helpful where they can and contribute positively to the cause. That’s a huge difference from where we were four years ago.” 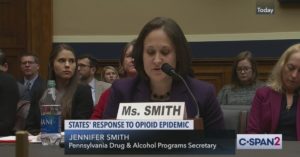 The disaster declaration was a double-edged sword in some ways, however. As the death numbers from opioid overdoses began to plateau and even decline in 2018, so did the urgency surrounding the epidemic. Success is important, but it also must be sustained, Smith said.

“I have sensed just within the last calendar year that there’s much less momentum around the crisis,” she said. “Part of that, I think, is people get tired of talking about it and hearing about it. Part of it is seeing some successes in terms of changing the trend of overdose deaths. Those successes are good, but the decrease in momentum is also a little bit dangerous from my perspective because we certainly haven’t kicked this.”

Smith said the Commonwealth has a long way to go. In fact, as the opioid scare has started to subside, the Secretary said she has seen an increase in more polysubstance abuse, with individuals with substance use disorder combining opioids and stimulants such as cocaine and methamphetamines. Alcohol use disorder, a persistent problem for generations, is also front and center in the discussion.

“I’ve sort of seen a waxing and waning a bit of the opioid crisis, but certainly not a waning of what I call the ‘addiction crisis’ in the state,” she said. “It’s an interesting cycling of substances and one that we have to really keep a close eye on. It’s important for us to make sure that the treatment system and the recovery support to accompany it are flexible and able to meet the needs of those changing trends.”

Arming police, EMS personnel and even park rangers with naloxone has been a big push in Pennsylvania and is clearly one of the reasons opioid and heroin death rates have declined in recent years. But when it comes to addressing and combatting the long-term issues associated with opioid use disorder, the approach by Harrisburg lawmakers over the last few years has been focused heavily on Medication-Assisted Treatment (MAT). While MAT continues to play a key role, Smith also emphasized that long-term aftercare recovery centers like The GateHouse are “very important” to helping recovering addicts turn their lives around.

Smith’s vision of the perfect drug and alcohol treatment system is where providers have the ability to prescribe medication when it’s appropriate but also understand that it won’t be appropriate in every instance.

“Facilities like The Gatehouse are critical because they provide treatment to individuals in our communities who need it, whether they’re on MAT or not,” she said. “The messaging gets a little distorted because federal grant dollars are often tied to improving access to medication. That’s really because, for so many years, there were programs that were exclusionary to medication, and there was an attempt to move the pendulum back toward the middle. It wasn’t an attempt to say that anyone who has a substance use disorder has to be on medication, because that’s absolutely untrue.”

In many ways, Smith has helmed the Department of Drug and Alcohol Programs at one of the most pivotal moments in the Commonwealth’s history. The last four years have dramatically changed the perception of individuals with substance use disorder for not only lawmakers but the general public at large. While the stigma hasn’t been completely lifted, the shift in tone and the attention that the opioid crisis has commanded during Wolf’s tenure as governor have ushered in a new era of understanding and compassion. It’s made Smith’s job easier—and a lot more productive.

“I think the Legislature has responded very well to our initiatives, and it really has been great to work with people who, for the most part, understand what we’re trying to do and want to help,” Smith said. “That’s a very big difference from where we were four years ago. It’s very encouraging to have the Legislature as a partner instead of an adversary.”

For more information about The GateHouse or our programs and services visit Our Services page, or call 717-393-3215.