The Opioid Crisis as a Public Policy Issue: The Perspective of Sen. Ryan Aument 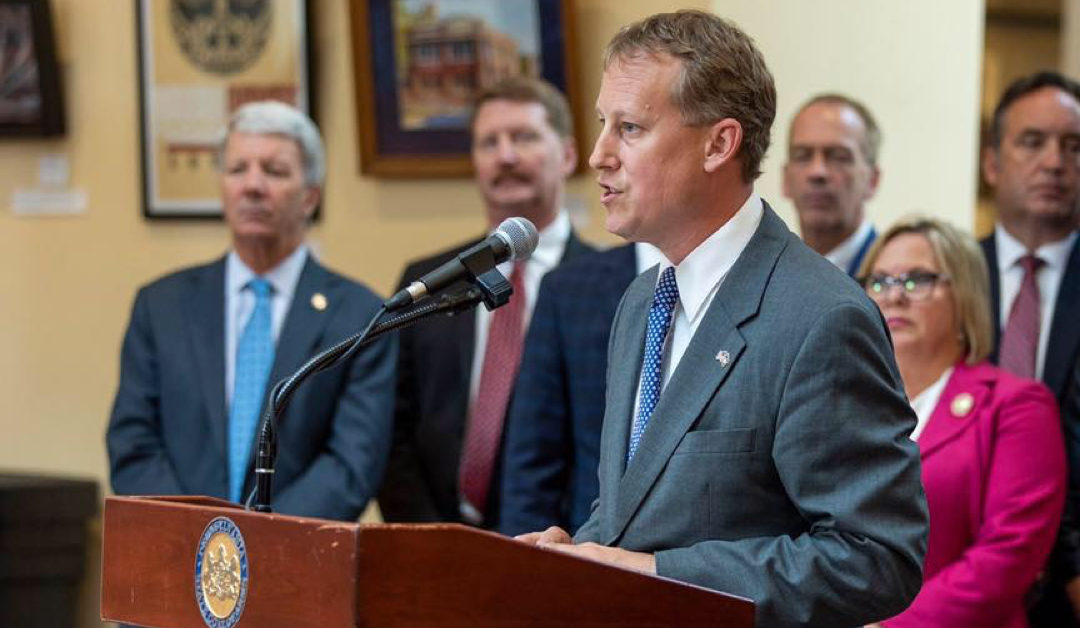 Across the country and around the state of Pennsylvania, there are very few lives that are untouched by the effects of the national opioid crisis. It’s true in our small towns, it’s true in our big cities, and it’s true right here in Lancaster County.

In the halls of state government, Pennsylvania lawmakers are actively working to address it.

Senator Ryan Aument, who serves northern Lancaster County’s 36th state Senatorial District, said many of his colleagues in the Pennsylvania Senate have both publicly and privately shared stories about how the opioid epidemic has hit home for them.

“It’s very rare that you engage a family now that doesn’t have a loved one or someone they know touched in some way by the disease of addiction, whether it’s heroin, prescription drug abuse, or something else,” he said. “In my own family, I have a brother-in-law who has struggled for the past number of years with addiction. For him, it started with an opiate prescription for a shoulder surgery. He’s struggled with prescription drug addiction ever since. The sad fact is that nearly every family is impacted by this crisis on some level.”

The Frustration for First Responders

Even before his brother-in-law’s battles, however, Sen. Aument was hearing about the scourge of addiction and the impact the opioid epidemic was having on Central Pennsylvania.

“About halfway through my first term in the Senate, I did ride-alongs with each of the police departments in the 36th District—at least the ones that had ride-along programs at that time,” he said. “I think I went out with about eight police departments. I typically did a night shift. I would go out on a Friday night from about eight o’clock to about two in the morning. I didn’t do a full shift, but I did a good portion of it.”

Without fail, he said, each and every police officer he talked to cited opioid addiction as their top concern and the top issue that their communities were facing.

“They could even point to certain houses where they had monitored dealing, or where folks had overdosed, or places where they had brought someone back through the administration of Narcan,” he said. “It was eye-opening.”

“These officers often feel helpless to get these people the help they need,” Sen. Aument said. “They can hand them off to EMS personnel, but there’s no requirement that they go into treatment. So, of course, this is where you begin to see the bridge to a public policy discussion.”

An Issue to Rally Around

Sen. Aument said there are a number of people who continue to advocate for involuntary commitments.

“After so many instances of overdose and the administration of Narcan or Naloxone, the question that keeps coming up is, ‘Should there be some sort of rule about when involuntary commitment is required?’” he said. “More importantly, would that even be effective? If somebody is being forced into treatment, that means they’re unwilling to go into treatment, so is it really effective? That’s one issue that the Legislature is still debating.”

And debates in Harrisburg aren’t typically easy. In such a politically polarized environment, even the most rudimentary of discussions can quickly devolve into contentious legislative battles. But when it comes to the opioid crisis, Sen. Aument said Republicans and Democrats seem to have found common ground.

In January 2018, when Gov. Wolf declared the opioid crisis a statewide disaster emergency to, in part, encourage lawmakers to take action, both sides of the aisle rallied around the decision.

“I certainly think he was right to do so, because I think it helps elevate the conversation and shine attention on the issue,” Sen. Aument said. “This is one of those areas where there has been tremendous bipartisan support and agreement. Sen. Gene Yaw, a Republican in our caucus, has been a real leader on these issues and has conducted a number of hearings and has worked closely with the governor. In fact, last year in his budget address, the governor specifically highlighted the work of Sen. Yaw on these issues. It has been good to see such a bipartisan effort, and I do give the governor a lot of credit for bringing attention to these issues and for looking for ways to drive funding out.”

However, Sen. Aument says he doesn’t have a good handle on whether the Commonwealth is being diligent enough in its efforts to follow through on existing policy and program funding.

“We want to make sure that we’re actually taking a look at the return on our investments and measuring outcomes to make sure we’re driving funding to the communities that need it most,” he said. “We also must make sure that those communities are, in turn, using that funding for programs like those at The GateHouse, which are having a real impact, both from an educational standpoint as well as from a treatment and recovery standpoint.”

This past February, Sen. Aument said, members of the state Senate Republican Caucus held a retreat to discuss legislative priorities.

“The issue of combating the opioid crisis ranked very high among our members,” he said. “It fell just behind economic issues and workforce development, which are always at the top of the list. That should illustrate just how big of a deal this is to lawmakers.”

In mid-June, just as the General Assembly was working to finalize a budget plan for the new fiscal year that began on July 1, Senate Republicans introduced a package of bills aimed at curtailing the opioid crisis through changes in public policy. One of those bills was Sen. Aument’s Opioid Patient Treatment Agreement, Senate Bill 572. The Senator’s cosponsorship memo can be found here.

“One of the areas I believe we need to address is when someone is going to be prescribed an opiate for a protracted length of time,” Sen. Aument said. “In those circumstances, my bill would require an opiate prescription plan that would be agreed to between the physician and the patient. The plan would provide for baseline drug testing to be done, so we know what’s in the patient’s system and we know that that person is not already abusing substances. Then, there would be random drug testing to make sure the plan is being followed.”

Other bills in the package call for limiting opioid prescriptions to seven days unless there is a medical emergency that puts a patient’s health or safety at risk, stiffer penalties for drug dealers, the establishment of a recovery-to-work program to help recovering addicts find occupations through local workforce development boards, and more.

“And these are just some of the specific policy discussions that we’re having,” Sen. Aument said. “There’s no member who’s not hearing from their constituents about this problem and isn’t very much engaged in this issue. We’re looking to provide as much assistance as we can to the folks doing the great work at places like The GateHouse. Legislatively, we want to do as much as we can to give them the tools that they need to help the greatest number of people.”

A Problem with Many Perspectives

Just about everywhere he goes, Sen. Aument said he hears from people on all sides of the opioid discussion.

“Whether I’m out in the community talking to families or whether I’m talking to law enforcement or taking tours of facilities, it’s on everybody’s minds,” he said. “We are also receiving calls in our offices in Lititz and Harrisburg, as well. In many cases it’s a family member who’s very, very concerned for a loved one and is looking for resources and ultimately an answer. In some cases, the individual may be interested in treatment and we can make a referral or direct them to a resource like The GateHouse.”

In other cases, however, it may be a family member who’s concerned and is trying to get help for a loved one who has yet to show an interest in treatment.

“Obviously, that’s a far more difficult conversation,” Sen. Aument said. “And it once again brings up this discussion of whether you can or should force someone into treatment who doesn’t want to be there. I hear from folks on all sides of this aspect of the issue.”

There are no easy answers, he said.

“I’ve talked to folks—really smart people who know these issues and know the industry really well—and even they have different perspectives and opinions about it,” Sen. Aument said. “And then you have medical personnel and law enforcement officials who are just looking to get some help to stop the repeated overdoses. It’s incredibly demoralizing for EMS and police. They continue to express to me their tremendous frustration just about every time I speak with them.”

Narcan and Naloxone are both effective treatments for overdoses, but they’re also very expensive and can drain public resources. That’s where lawmakers have to draw clear lines and decide when enough is enough.

“It’s a tough one,” Sen. Aument said. “If you back me into a corner, I think there almost has to be a trigger at some point when you’re dealing with the same individual four and five times, over and over. I don’t know what the magic number is, but I do believe there ought to be some sort of requirement to seek treatment when you’ve been revived numerous times. While I recognize that for some of those folks it may not be effective, maybe for one or two it will.”